The stone bridge appearing before your eyes dates back to the half of the Sixteenth century, while the previous ones were made of wood. The most famous architects of that time, such as Palladio, Michelangelo and Sansovino, presented their plans, but at finally, in 1588, a nearly unknown architect succeeded in winning the commission: Antonio Scarpagnino. The final result was the Bridge in its current shape. 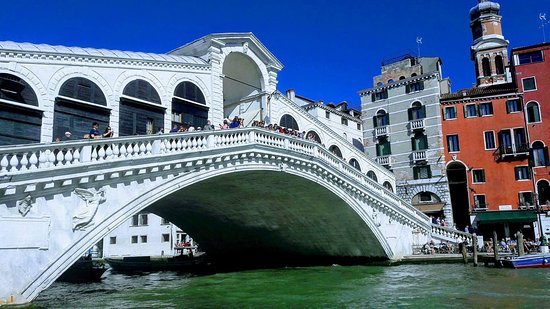 Before arriving at St. Marco Square you must go along the smartest way in Venice and have a look at the windows of the shops facing it. 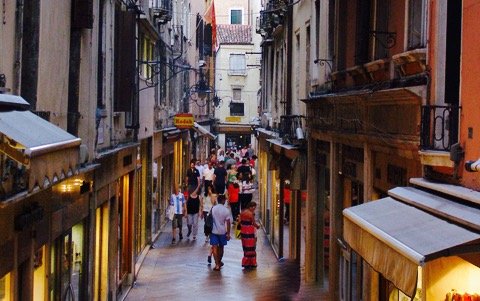 THE CENTER OF VENICE

At the end of the Mercerie an arcade will let you into the Square, above which the Clock Tower rises up, with two brawny Moors that strike the hours all the year. The Square is magnificent: from the arcades of the Procuratie Nuove e Vecchie, you can see several tables of the famous cafés of the Eighteenth century, such as Florian, Quadri and Lavena, in the sky the highest bell-tower in Venice stands out, and there is the evocative St. Marco Basilica overlooking everything. 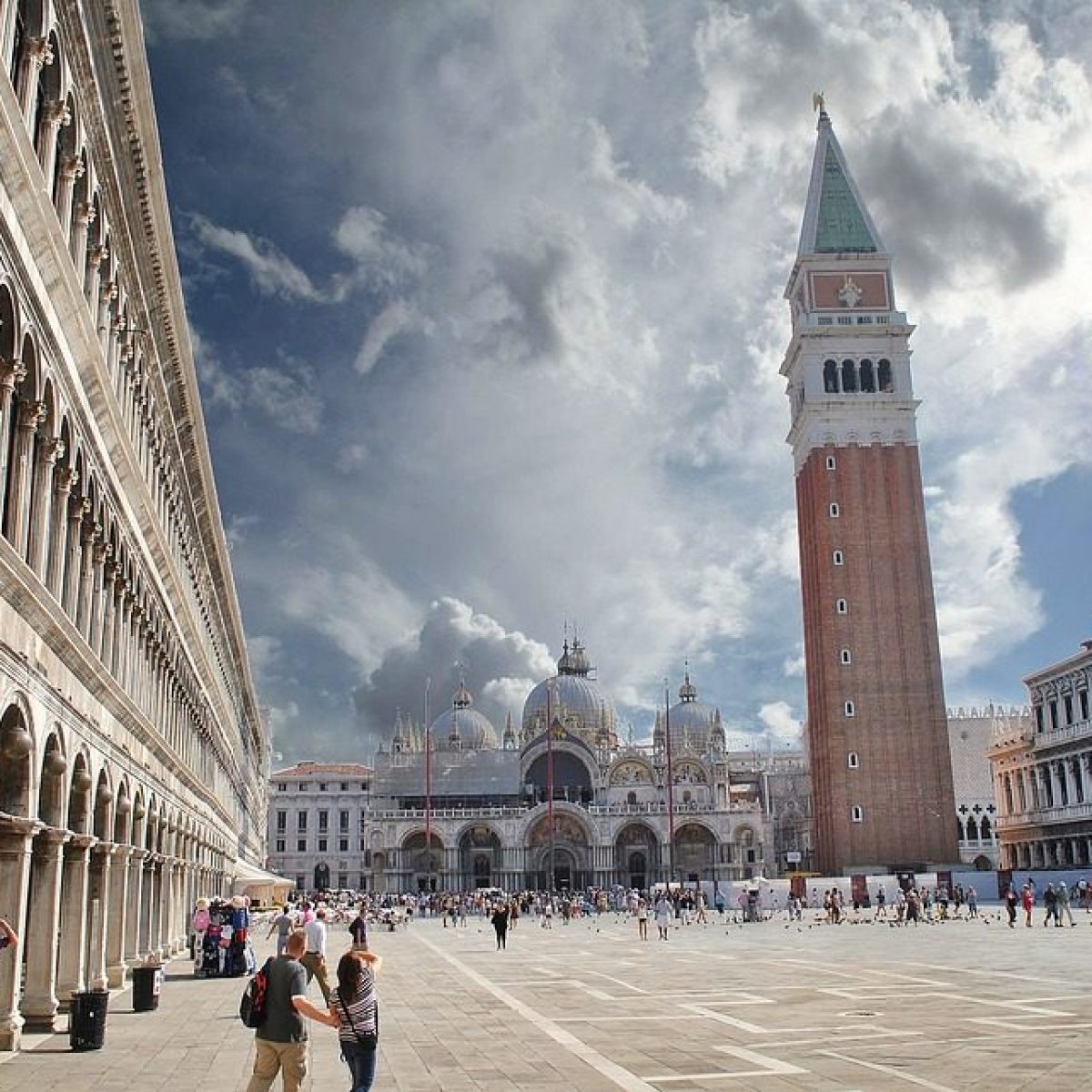 THE CENTER OF VENEZIA

The Basilica, in its current Greek cross shape, with five large cupolas dating back to the year 1000 and erected in Byzantine forms, was probably planned by a Greek architect, though it was built by Venetian and Lombard workers. Its façade is made of two parts, each with five larges arcades. The upper balustrade one is enriched with the presence of four bronze horses (copies) that represent a wonderful Byzantine work of art being the only ancient quadriga which has been preserved up to now. Unfortunately if you want to visit the interior (about one hour), the walls of which are covered with more than 4200 square meters of mosaic, you will have to queue up. You can decide to get into line for visiting the interior (one hour) here or to go towards the bell-tower, which was rebuilt after the collapse the previous one of the Seventeenth century, about a hundred years ago, where the queue often does not take so long time, and once you ascends by the lift, you will admire the whole Venice from the top (stop on the summit of the belfry: at least half an hour). 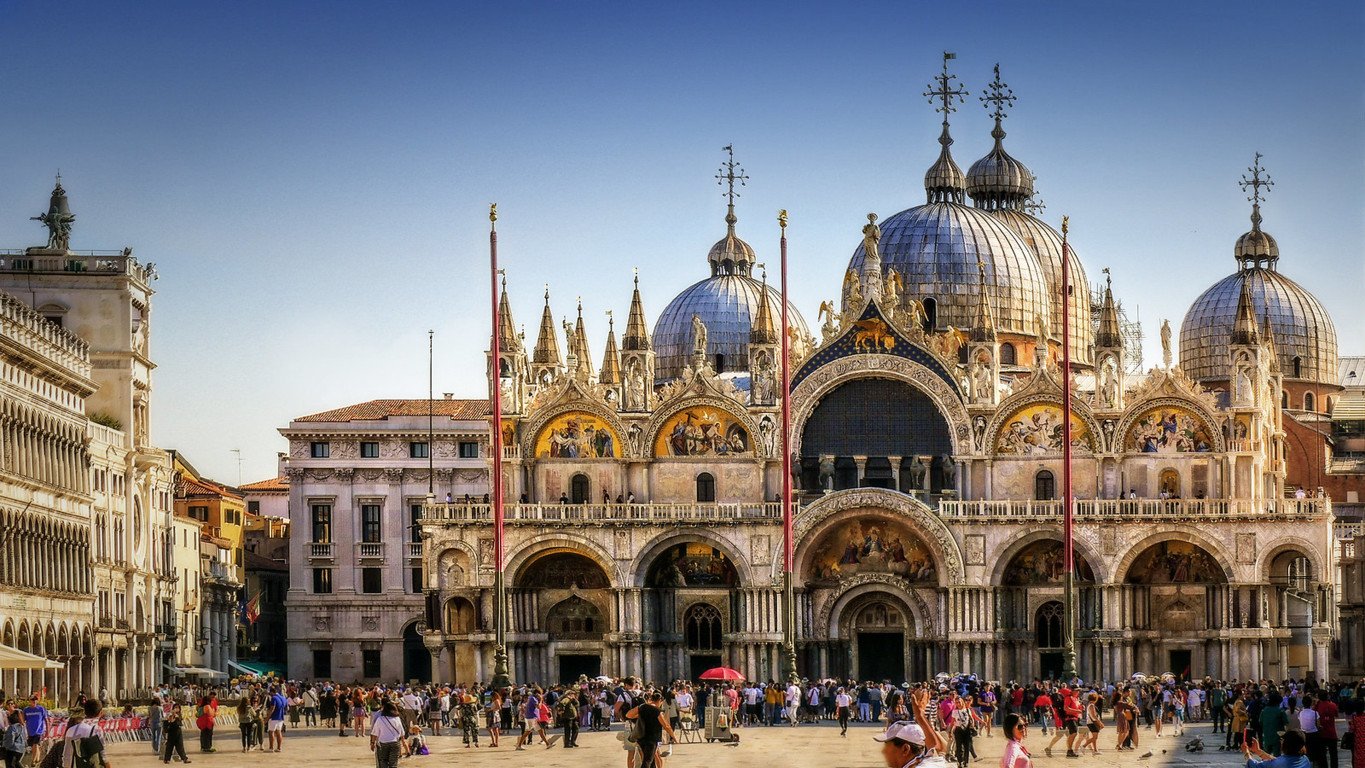 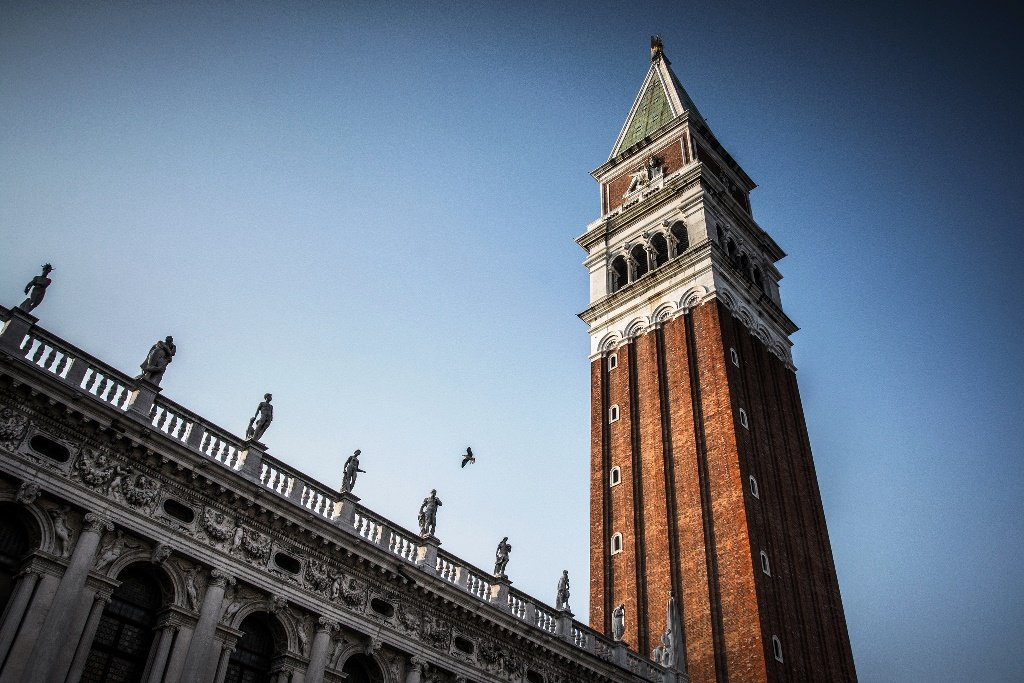 A GOTHIC MASTERPIECE OF ARCHITECTURE

A masterpiece of the gothic art, the Palazzo Ducale is made of a stately bedding of building and decorative elements; it is made of three large building bodies which have ab-sorbed and unified previous constructions. The side facing the Dock of St. Marco, that is the most ancient one, was rebuilt from 1340 onwards; the side facing the Square was developed, in its current shape, from 1424 onwards; the opposite Renaissance side, with the residency of the Doge as well as many government officials, was rebuilt between 1483 and 1565. The visit of the interior (at least three hours) can follow different itineraries: first you can wander about the cloister on the ground floor and then go along the loggias on the second floor; then you could get into the apartment of the Doge and visit the marvelous Institutional Rooms covered with works by Tiziano, Veronese, Tiepolo and Tintoretto; then it will be the turn of the Armory and the Jail. 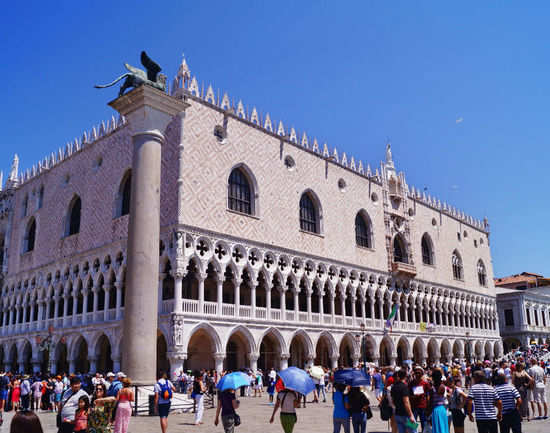 if you are exhausted after the visit of Palazzo Ducale it is the right moment for catching the water-bus n.82 at Riva of Schiavoni in order to reach the quiet St. Giorgio Island, from where you can enjoy an enchanting view of St. Marco Dock. The clear Palladian church here located is a marvelous rival to the Gothic architectures of the Square. 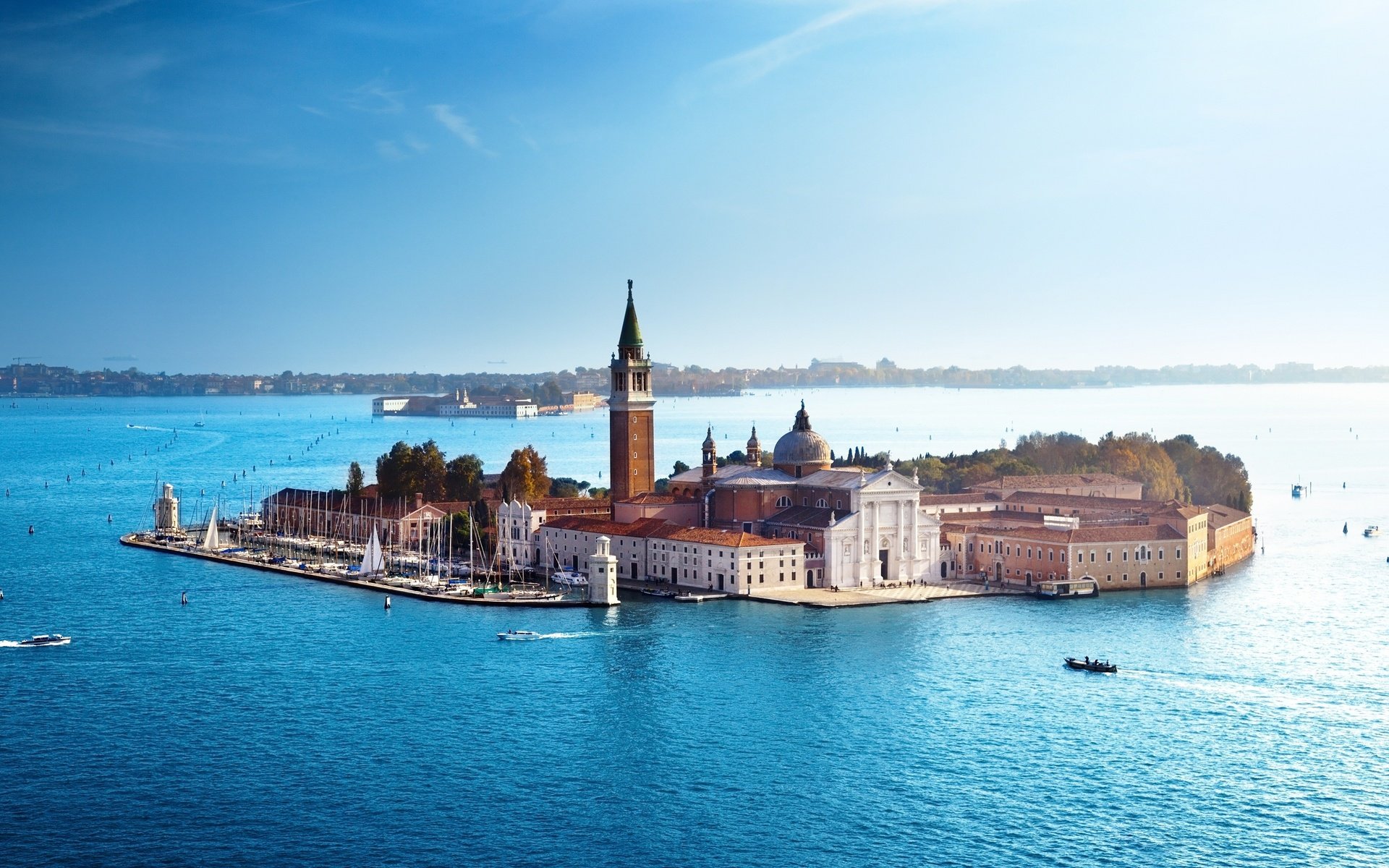 LOOKING FROM THE VAPORETTO

if you decide not to get off the water-bus at St. Giorgio stop, you will have the opportunity of comfortably sitting and admiring the island and the church, by going on towards the Canal of Giudecca. A little farther another marvelous Palladian Church (of the Redentore) will appear on the left. 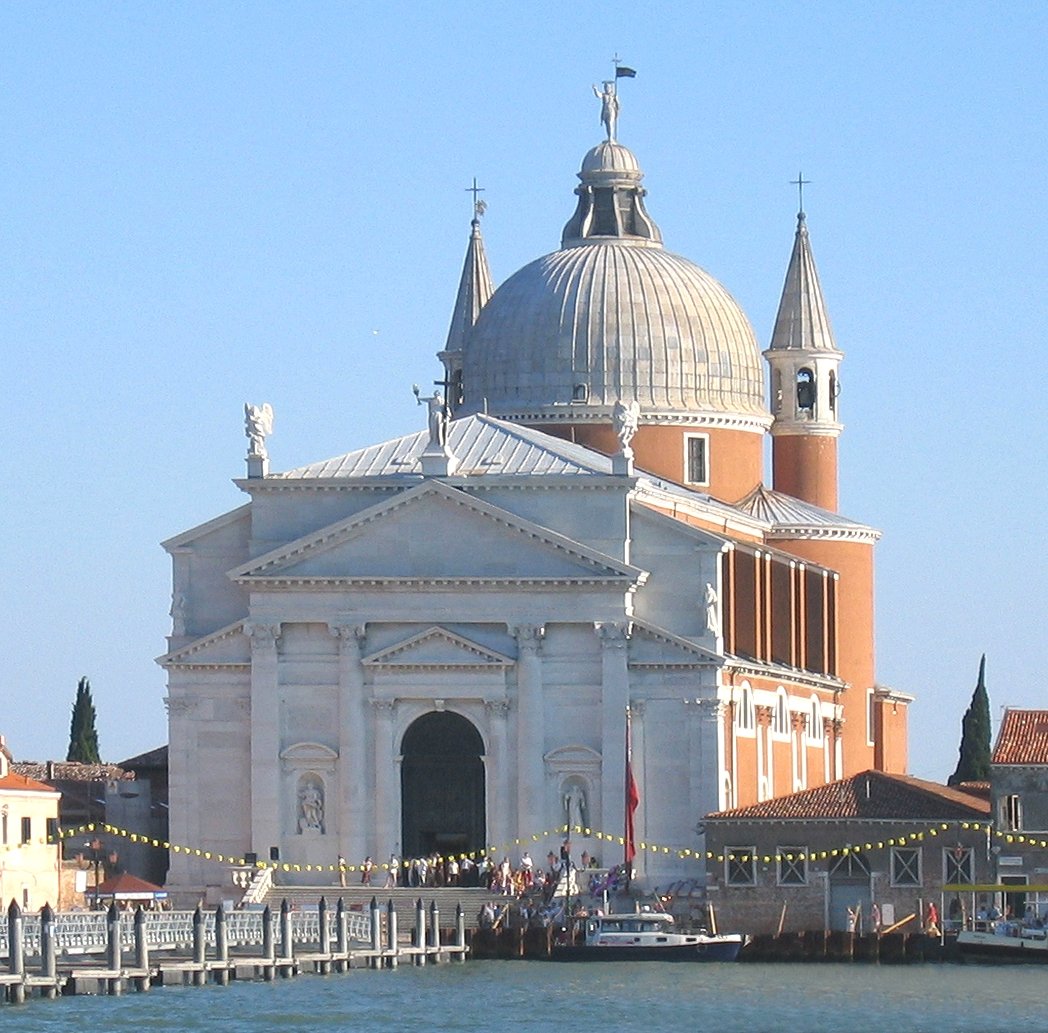 BETWEEN A BRIDGE AND A CALLE

Get off at Zattere stop, that is a long footway where in spring and summer it is extremely pleasant to walk and taste the “Gianduiotto” (namely a typical ice cream on a stick) and from where you can reach the Academy Bridge or the only wooden bridge across the Canal Grande, the view from this bridge is very beautiful. If you are tired you can catch the water-bus n.1 and get back to Rialto, but we suggest you to go on some more distance (about 15 minutes) on foot, passing through Campo St. Stefano, Calle della Mandola, Campo St. Angelo and Campo St.Luca, and plunge into the frenzied life of common Venetians, among drugstores, inns and shops, in order to reach Campo St. Bartolomeo where you must get the Spritz, that is the local aperitif. 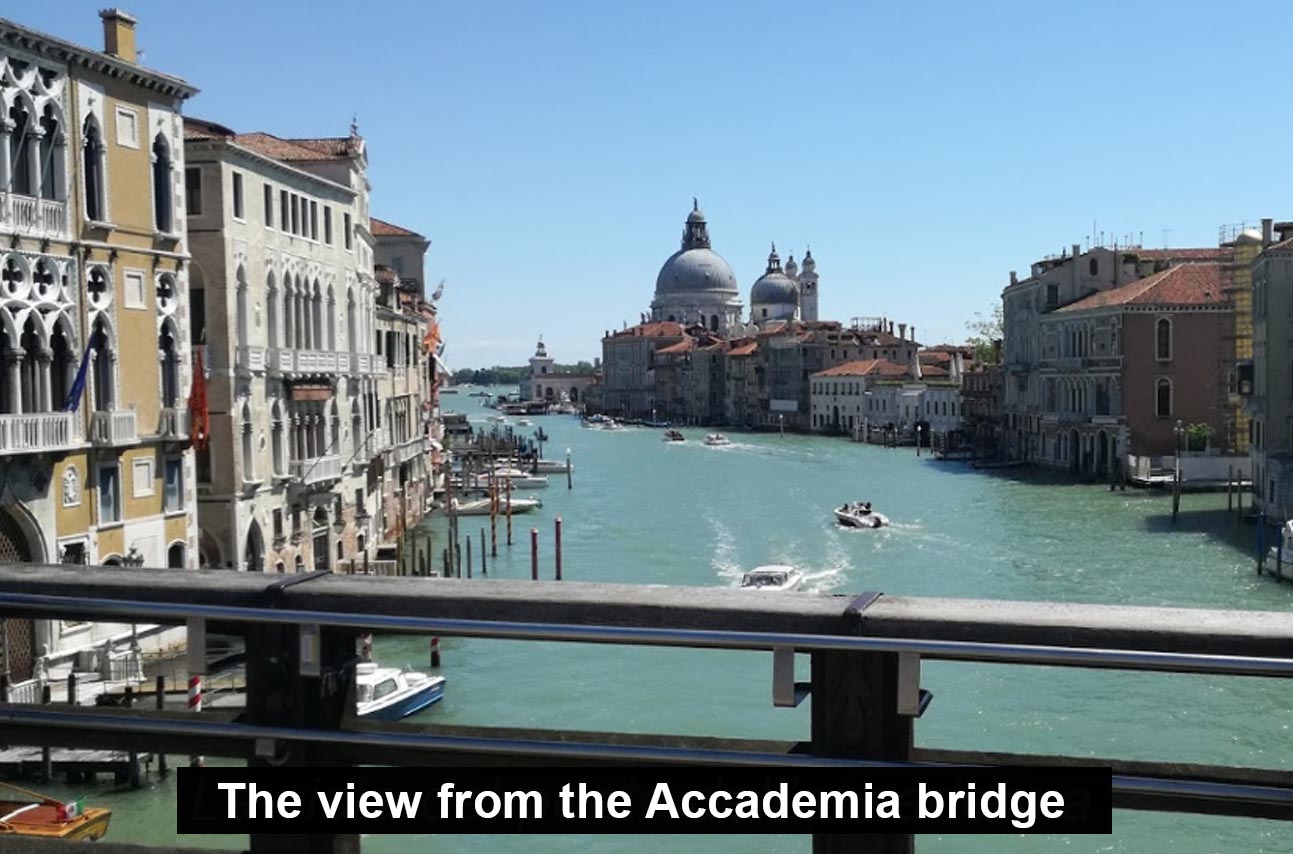